This post has been published by me as a part of IBL; the Battle of Blogs, sponsored by WriteupCafe.com. Join us at our official website and Facebook page. www.indianbloggersleague.com, www.facebook.com/IndianBloggersLeague, http://www.writeupcafe.com/ibl“


It was the worst rainfall I had ever seen.

The torrential rains had turned the rivers into Life-Takers. They were no more the Life givers that they once were. It sent everyone into frenzies of panic and disdain. Everyone was looking out only for means to run out of this place into safety and into the comfort of their loved ones.

I had to find an escape route too, and luckily I was spared the agony of having to worry and care about my loved ones since I was travelling alone. But the thought of leaving so many people in misery and running away from my duty to help them weighed heavily on my mind. So I decided to stay back. As long as the rain continued lashing, there was very little we could do. So we waited... waited for the rain to stop… waited for the morning to come.

The morning brought with it an ugly picture of devastation and destruction caused by the fury of nature, by the torrential rains and the flash flood last night. We were dumbfounded witnessing this cruel act of nature. Being on a higher ground, we had been considerably safer, but there had been so many thousands of them who had not been as lucky. The rivers had breached their banks and showed no signs of receding. So many had been washed away, others trapped beneath debris of buildings razed to the ground and thousands of them stranded without food, water and roof over their heads.

The large scale of devastation was shocking. We jumped headlong into the rescue operations joining hoards of other rescue workers.

That’s when I saw that angel.

She must have been only 8 or 9 years old but she was one of the most active members of our little group. She was a virtual bundle of energy and it must have been her infectious energy that kept us all going. We saw her little feet scampering around looking for people in need and running to us with the little details.

“Uncle look over here, someone’s trapped under this debris.”

“Bhaiya, help me carry this sheep to the other side.”

She kept up her search for the entire day, scouting for people needing help and bringing it to our attention.

“Nimmi” she replied even as she ran carrying a bottle of water for an old man who had just been rescued.

Her ‘never-say-die-spirit’ was the stuff heroes are made of, I thought as I saw her help the old man sip a little water.


We erected tents so that they could act as temporary shelters for people who had been rendered homeless. Go back to the buildings was ruled out, because they could come crashing anytime if it rained again.

The sun had begun to make his descent over the horizon signaling the end of the day. We were terribly tired after a long day’s work, and as we retired to our tents, we saw Nimmi still running around.

“What are you doing sweetheart,” I asked her running my hand over her head.

“I’m going to fetch wood Uncle,” she said, “The nights are very cold here, and we will need to get a fire burning to keep us all warm.”

Why didn’t we think of that!

She led me to a clearing and a couple of us helped with chopping the wood, while she bundled wood neatly into stacks.

“Why don’t you rest sweetie, we’ll take care of the rest” I told her, looking at her tired face.

“After carrying this stack to the tents” she insisted.

I took out my mobile and clicked a picture of hers with the pile of wood stacked between her tiny frame and her worn out hands.

Our own little squirrel helping us to rebuild lives, just like the squirrel in Ramayana helped build the bridge! I thought and smiled.

“You worked very hard; you must be tired, aren't you? You did a great job!” I said.

“You are a courageous little girl.”

“Are you here all alone? Where are your parents? They must be worried to not have you around. Did you tell them you are here?” I asked suddenly realizing that I hadn’t seen her family since morning.

“We live down a hillock in a little shanty. As soon as the rain got heavier, our house collapsed and we all had to run to higher grounds” she said, visibly tearful now.


“Why didn’t you tell me that before? We must look for your family members” I said comforting her.

“My father taught me everything I know, so if I am all right my family would be fine too. I am sure they are. We have to take care of the people who need our immediate attention.” She replied.

What an angel of compassion and bravery! She was a soldier in her own right!

I had joined the rescue operations because I was alone, because my family was safe, and because I was quite capable of taking care of myself. But this girl had joined in to help, knowing pretty well that she was young, alone, separated from her family and unsure of their safety and whereabouts.

The resonating sound of thunderclouds woke me up. Nimmi was sleeping next to me with all the other homeless children. She woke up too. Soon it began raining again and the river seemed to be overflowing again. By morning the river had swollen!

Several people had gathered around to look at the raging waters knowing how dangerous it could be. Suddenly we heard people screaming for help. Apparently someone had slipped into the marsh while looking at the waters. We rushed to see what had happened. While we ran towards the river, I saw Nimmi run back into the camp tent.

Poor child, she must be scared, I thought.

How wrong I was! Our “little hero” came running to the banks within a minute of us reaching there, holding a rope in her hands, and throwing it in to the boy who was just about to slip into the river below!
What presence of mind!! Her parents had really taught her well.

We threw the rope but the kid was too scared to catch the rope with one hand.

“Please hold the rope while I go down to bring him up.” I told my team.

“No, let me go down and catch him as I am lighter and it would be easier for you to pull me up” said Nimmi.

“She is right” said someone.

We lowered her with the rope tightly secured around her waist. Slowly and expertly Nimmi made her way to the frightened kid and grabbed him with both her hands. We started pulling them but somewhere around the marshes the rope got stuck and no matter how much we tried it remained stuck. But Nimmi loosened her waist support and urged the little kid to grab the rope over her head and helped him reach to the ground safely, letting him use her hands for support.

But she was still not safe as the rope was still stuck, and she could not climb up without support. We saw her leg slip and I almost missed a heartbeat. She was hanging precariously over the river. Nimmi’s face was as calm as ever.

Hold on my little angel, I prayed.

I kept trying too, tugging at the rope, jerking it so that it would come loose. Suddenly, the rope felt loose and excitedly I yanked it up. But my heart sank when I saw that Nimmi wasn’t at the other end. Where was she? I frantically looked down, my heart beating wildly, my eyes searching every corner of the marsh. Maybe she was stuck somewhere.

Then my eyes fell on the rope. The end of the rope was broken. I couldn’t believe I had lost my little angel. For a very long time I sat there with my face buried in my palms, weeping like a child.

After a few days, Army helicopters flew us back to safety. I sat glued to the television watching the updates, identifying familiar locations and recounting those difficult days. I thought of the brave heart Nimmi, wondering if her family was safe and if they had ever found out about their little girl. I took out my mobile and looked at her picture. Her deep black eyes, so full of determination. Carrying that pile of wood in her worn out hands.
The news reader announced that the count of bodies had been rising and as the river subsided, more bodies were being washed ashore. Among them was the body of a 9 year old girl with a cut rope secured to her waist. 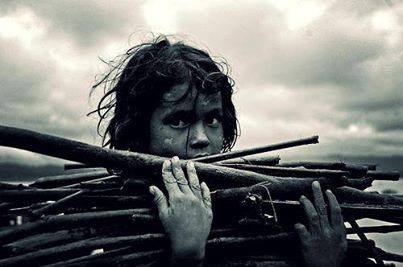