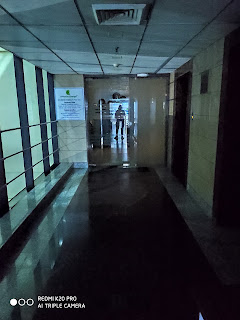 It was the last shift before everyone left for the day and the next day was Holi so everyone shook hands with each other and wished them, Happy Holi. The actual problem started when they tried to open the door to leave. Despite multiple tries, the door just wouldn't open. The housekeeping guy called the admin team and worked with them trying to resolve the issue. But even after multiple people trying their hands on the issue the door just wouldn't stop showing the red light and kept on closed. The final solution was thought to cut off the main power as it releases the doors and it was done so.

But the gate still didn't open and along with the emergency lights, the office floor was filled with a cloud of fine dust coming out of the Air Conditioner duct which caused everyone to sneeze and cough violently. And then the voice blared through the floor:

"Ladies and gentlemen, how are you doing? You are the last 20 people to leave the office but now you are dependent on me. The gate wouldn't open till I am entertained completely and all the others who are watching you live. The rules are simple - You all are locked in the office but only one of you will leave here, The gas you just inhaled will kill you all in 3 hours. So do the easy thing, just kill all your colleagues let's play Holi with the blood and the last man/woman standing would be allowed to leave as the champion and would also be given the antidote for the poison. So what are you guys waiting for - Start Killing."

Absolute Silence on the floor

And then the mayhem began initially people just pushed their nearest neighbor around or punched them lightly but soon people panicked and the first to fall was Aman whose head was smacked in the pillar till his brain matter drooped to the floor.

Poonam lost her head when a couple of her colleagues picked and dropped her neck first on the glass partition. Samrat had his head snapped from behind.

Rachna ran quickly to the cafeteria and returned with two knives in both the hands and soon she carved up Ram and Tarun. Next to go was Hemraj who was stabbed 50 times by Rachna.

However, while Rachna was busy stabbing Hemraj people grabbed her hands from behind and she was promptly disarmed by people working in tandem and then quickly lost her head courtesy of some quick work by her teammates. After finishing Rachna, Priya and Gagan quickly jumped back and worked to finish off others.

Gagan lost his knife when a UPS came crashing on his head and departed with his life courtesy of  Shyam from the housekeeping department. Shyam picked up the knife and then wreaked havoc on the remaining people.

Priya had her back turned when she sensed something moved slightly which caused the CPU to fell down harmlessly but Priya didn't allow Manjeet to go any further.

And soon only Priya and Shyam were left standing, both were covered in blood and looked like they actually played Holi with the blood and only an hour had passed. They both eyed each other warily as they were tired too but they were full of adrenaline having killed most of their office mates.

With a roar, both ran towards each other and for a second it seemed like both were a match and the contest will go on for some time but Shyam slipped a little on a puddle of blood and that's all the time Priya needed and her blade found it's home in Shyam's skull and Priya was the last one standing.

She left her knife embedded where it was and ran towards the door which was unlocked now. And as she stepped out of the door she stumbled and fell down never to rise again and she didn't even hear the voice which said:

"Oh! I forgot to tell you the poison works in a little over an hour, not three hours it was a little lie to see how quickly you work. It seems you guys didn't work fast enough. Alas! what a pity."

The next morning the papers were filled with the tales of the bloody Holi which left more than 22 dead and no one to tell the tale the CCTV footage just showed people standing around the gate then they just went mad. There was no sound in the cameras that would've recorded the message. It was very well planned and the villains were free to wreak havoc another day.
Posted by Vikas Khair at 2:42 AM